Dear friends: I am thrilled to announce the release of my new collaborative album, "House on Swallow Street." All songs on the album were written and recorded while I lived in Sardinia, Italy, over the year 2019-2020, together with over twenty musicians, storytellers, songwriters and producers. The album is now available on all major streaming platforms; physical copies and digital downloads also available on bandcamp and through the link, below.
Read the most recent interview with Kristina from the November 2021 issue of "The Bluegrass Standard"
Click to set custom HTML
3/16/21 Thanks to the Italian-based "Giornale della Musica" (Torino, Italy) for this most recent and generous review of "House on Swallow Street"!
Review of "House on Swallow Street" (3/04/2021) by Alessandro Montefameglio, Storia della Musica (translated into English)

"Circumscribing the work of a singer-songwriter around her own musical influences can often be an end in and of itself. Sometimes, as happens for Kristina Jacobsen, an American musician of mostly country and folk inspiration, the music manages to reach another plane to grapple with belonging, places, and cultural mixtures. “House on Swallow Street” is Kristina's fourth album. Kristina engages with music not only as a musician, but also as an ethnomusicologist and anthropologist, bringing with her very rich experiences, such as the one that led her to a Navajo reservation for twenty years, where she lived in an Indigenous community, mixing her voice with that of local songwriters. Mixtures, roots, folklore, intimacy, with the eyes of the scholar and the artist and with her own (and others') chords.

“House on Swallow Street” gives life to an experience that, especially for us Italian mainlanders, sounds brilliantly odd and that can be summarized in the following question: “what happens when a musician from Massachusetts goes to Sardinia?” No one can answer that better than Kristina, because you could easily have met her on the streets of Cagliari (and beyond), the city where she taught Ethnomusicology as a visiting professor and where, for the Sardinian label Talk About Records, she recorded this latest album, a sort of diary of her first year on the island.

Even some Sardinian swallows, like the ones that appear on the album cover and, of course, in the album title, testify to this fact, where they appear on the first track, “Terra po Approdare” (the swallows you hear chirping are the ones outside her house –you hear them again, at end of the record), “These Cobblestone Streets” is a meditation, partly in English, partly in Italian, partly in Sardinian, of what happens when you come from so far and you encounter a new world (there’s great dialogue in Italian mimicked by Kristina, performed in spoken word during the track, or expressions like “Cannonau wash it down”, which we will soon suggest as a new universal pre-toast motto). In addition to the guitar and the folk influences, entrusted to guitarist Ignazio Cadeddu, the strings and harmonies should be noted. “Tiria” is a nostalgic bluegrass track whose text is written entirely in Sardinian, in collaboration with Matthew Papperi. “Sardinian Welcome,” with accordion, guitar and double bass, tells and translates the festive and livelier side of the island and of Sardinian village life. A different story is told in “Reckoning,” referencing a fishing village with a traditionally country folk tone (the collaboration is with the Sardinian blues singer Matteo Leone), and “On a Rooftop” (with Giuseppe Bulla), a more contemporary song, which takes us into the heat of a Sassari summer. Here, more than anywhere else, we notice Kristina's ability to bring together different styles, such as traditional American folk, with rhythms (hand percussion), typical Sardinian melodies, and more.

“Santi Sardi,” one of the key pieces of the album, together with the following three tracks, is an interesting experiment, where we see the capable voice of Kristina translate what are typically country songs in another cultural context, so much so that she is able to create a sort of authentic Sardinian saudade (sorrow, nostalgia), in the beautiful “Semus Torrande,” which tells stories of emigration outside Sardinia and, therefore, of homesickness. The final track, “Carraioru di Ruseddu” was written by Gavino Soro and Raimondo Sanna after the famous Rosello Fountain in Sassari."
​
[Read the original review in Italian, here] 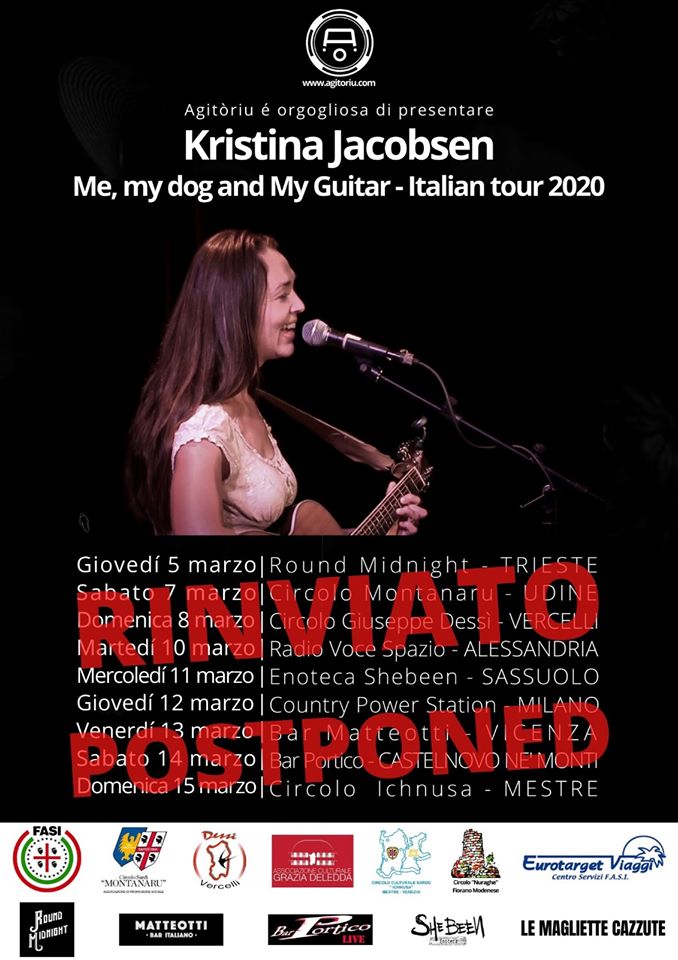 Thank you to reporter Cinzia Meroni for this interview and concert preview for leading Sardinian newspaper, L'Unione Sarda (7/22/18). 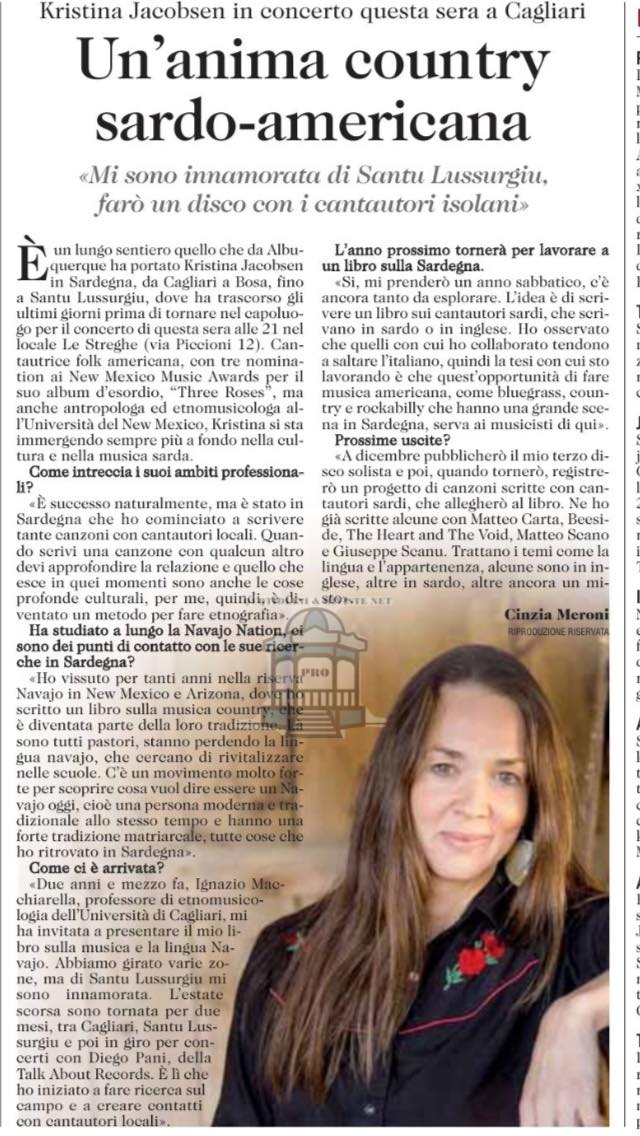 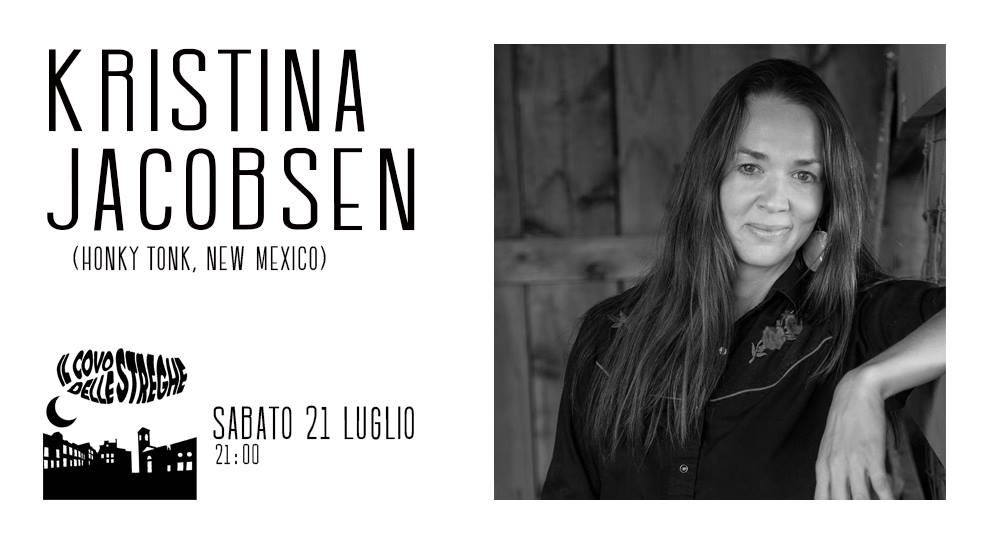 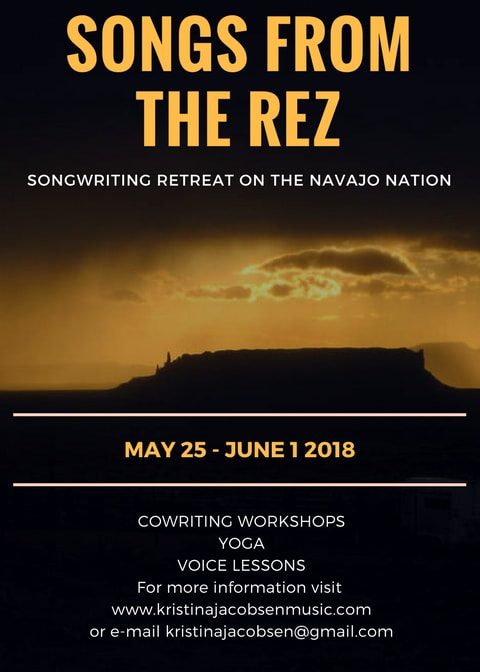 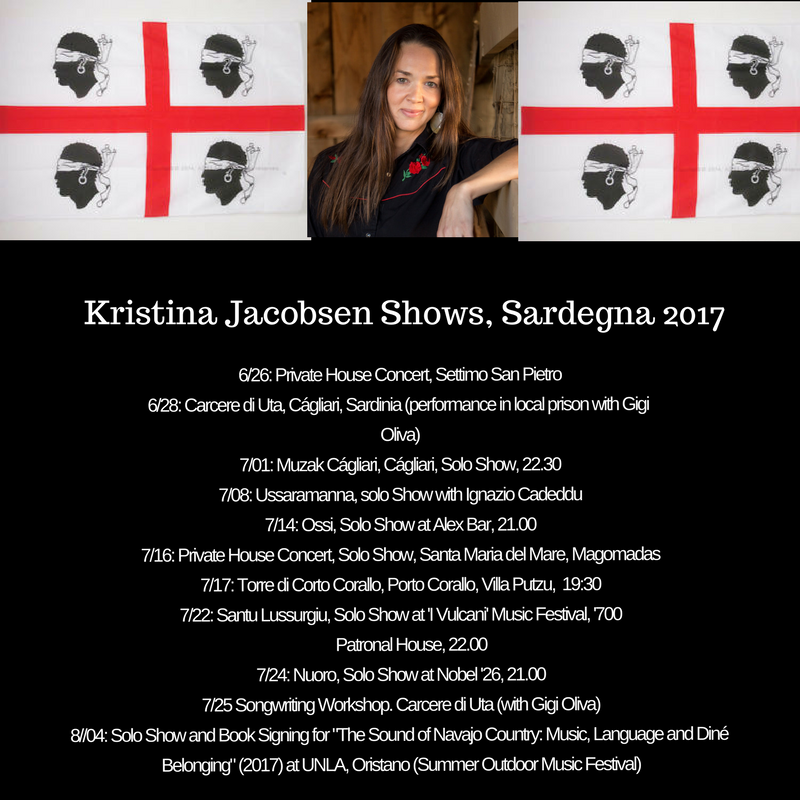 “Nominated for three New Mexico Music Awards, Kristina Jacobsen’s first album, Three Roses, proves that she is a certified country singer/songwriter who couldn’t be more authentic if she had been born backstage at the Louisiana Hayride in Shreveport, a program that she celebrates in a song of the same name. She delivers her songs in a yodeling alto that can warm your heart, bite off a searing denunciation, or celebrate good times with equal fervor. Her songs revolve, for the most part, around family, both blood and chosen, and she is especially adept at portraits. “Inez” paints a Navajo woman—“A Latter Day Saint, but she drinks pop and whisky”—who’s been beaten down but not conquered. “Has-Been Cowboy” flips off a man turned into a bitter bully with a limp. There’s grit, dust, desolation, and abandonment—hey, it’s country music—and love and redemption enough to make up for it. Jacobsen, who plays guitar and lap steel, is backed by a fine group of  musicians, and they help her, as she says in her song “Ms. Loretta Lynn,” “sing it sassy . . . sing it downright brassy.” Mel Minter
Performing a new song in Copenhagen, Denmark, October 2016 (Carlos Ochoa, videographer)
Songbirds on the Move, Fall 2016 Tour with Lisen Elwin and Mette Halling 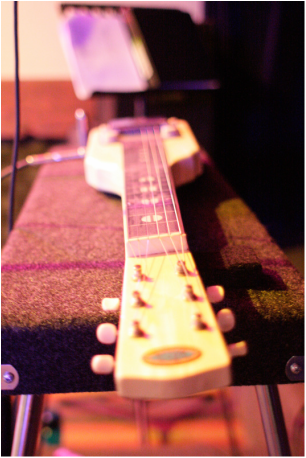